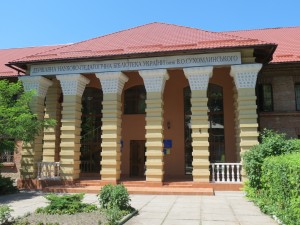 Central Educational Library of the Ministry of Education of Ukraine began functioning in 1993 as a structural unit of the Institute of Content and Teaching Methods of the Ministry of Education of Ukraine, according to the Decree of the Ministry of Education of Ukraine № 128 from May 7, 1993. It inherited the funds of Special Pedagogical Library of Teachers’ House, founded in 1923. The main purpose of the newly established library was to satisfy information needs of all specialists in educational sphere of Ukraine. During 6 years (from 1993 to 1999) Central Educational Library formed the funds through government funding and the assistance of the Kyiv City Council of Trade Unions of Education, the International Fund “Renaissance”, Yaroslav the Wise International Education Foundation, the All-Ukrainian Pedagogical Society, Ukrainian-American Charitable Foundation “Saber-Svitlo” and other state and public organizations of Ukraine, Ukrainian diaspora, gifts from scholars, writers and teachers. On January 1, 2000 Central Educational Library Fund totaled over 120,000 issues, 40% of them was professional literature. There were about 560 periodicals of Ukraine and CIS countries.

According to the Resolution of the Presidium of the Academy of Pedagogical Sciences of Ukraine on November 17, 1999 (Minutes No 1-7 / 10-125) Candidate of Historical Sciences, Senior Researcher, Honored Worker of Culture of Ukraine Pavla Ivanivna Rogova was appointed the first director of V. Sukhomlynskyi State Scientific Pedagogical Library of Ukraine. Under her supervision the team of the Library made a great job in the organization of the fund, a big repair of the building and its facilities (in 9, Berlynskoho street). In this way, comfortable conditions for the job of departmental staff and users were created in the library.

Since January 2000 V. Sukhomlynskyi State Scientific Pedagogical Library of Ukraine has been operating as a research institution for the branch library science, bibliography and book science, as a national branch book depository, national scientific information, coordination and scientific-methodical center of libraries of educational sphere of Ukraine. It is a part of the National Academy of Educational Sciences Ukraine.

On April 24, 2003 a reading room of Sukhomlynskyi Fund  was opened thanks to the support of the family of the famous Ukrainian teacher Vasyl Sukhomlynskyi. Since then it has become a scientific laboratory for studying and popularizing his inheritance.

According to the Decree of the Cabinet of Ministers of Ukraine No 664-p from November 5, 2003, State Scientific and Pedagogical Library of Ukraine was named after the outstanding teacher-humanist Vasyl Sukhomlynskyi.

The main goal of the Library is the information support of the national teacher education, science, practice, and the satisfaction of professional needs of researchers and practitioners in educational sphere of Ukraine; scientific research in the field of pedagogy, psychology, methods of teaching specific subjects; the introduction of science, technology and excellence into the activities of school and their departments – libraries, as well as the promotion of education and self-education of  teachers, scientific, educational, library staff, young learners, parents.

The priority directions of the Library activities are:

–  carrying out the fundamental and applied research on issues of branch library, bibliography, book science, information activities; educational and biographical source studies, the history of education;

– the formation of  documentary and electronic resources system of the library as a scientific branch library and information center;

– the scientific and information support of the development of science education, pedagogy and psychology;

– the development of socio-cultural activities and international cooperation.

The Library has about 600,000 documents in traditional and electronic media. Every year it is replenished by 11,000 issues of documents.

A special part of the Library fund (28,081 documents) is a set of rare publications, documents of pedagogical, psychological, historical and cultural character of the 17th – beginning of 21st centuries. They are grouped into the following collections:

According to the Decree of the Cabinet of Ministers of Ukraine No1709 from 19 December, 2001, the items which date back to 1850-1917 are regarded as the national cultural heritage of Ukraine.

In 2016 the room-museum of rare books was established to display to the public and promote these unique scientific objects.  The room-museum is also functioning as a creative laboratory where the cultural and educational researches, exhibition and exposition activities are conducted.

Every year  more than 40,000 readers use the Library information resources. The Library issues over 400,000 thousand documents to its readers.