Visit of educationalists from the People’s Republic of China to V.O. Sukhomlynskyi State Scientific and Pedagogical Library of Ukraine 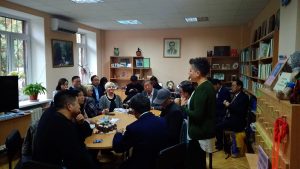 On 4 October 2019 a delegation from China visited V.O. Sukhomlynskyi SSPL of Ukraine. 14 educationalists came to Ukraine to get acquainted with the places associated with the name of the outstanding Ukrainian teacher Vasyl Oleksandrovych Sukhomlynskyi. His well-known name is respected by teachers of the People’s Republic of China.

They paid a call to the library within the framework of their visit to the National Academy of Educational Sciences of Ukraine, which has been studying and popularising the teacher’s oeuvre during many years. The specialists of the library make a close study of the teacher’s creative, scientific and methodological heritage. In addition, sector on study of V.O. Sukhomlynskyi’s activity was established in the History of Education Department in the library.

The delegation was met by L. D. Berezivska, the Director of the library, Doctor of Pedagogical Sciences, Professor, and Corresponding Member of the NAES of Ukraine. She informed the delegation about the history of and current situation in the library and presented the exhibitions of works by Vasyl Sukhomlynskyi, dedicated to the 101st anniversary of the teacher’s birth. The guests also got acquainted with the museum exposition, dedicated to the 20th anniversary of the library.

The Chinese educationalists visited the exhibition of works (drawings, collages, and installations) prepared by the children in the kindergarten No. 418 on the theme of children’s fairy tales by Vasyl Sukhomlynskyi. The children traditionally prepare such exhibitions dedicated to the teacher’s birth on 28 September.

At the end of the meeting, the participants exchanged souvenirs and took pictures.

The material was prepared by L.V. Sukhomlynska,
the researcher of the History of Education Department