On 27 January 2016 a room-museum of rare books was set up in V.Sukhomlynskyi State Scientific and Pedagogical Library of Ukraine, the NAES of Ukraine. It is a creati 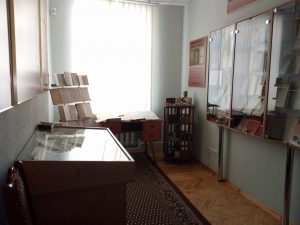 ve laboratory for carrying research, cultural, educational and exhibition activity out. Publications on education and psychology issued during 1850 – 1917 are exhibited in the room-museum of rare books. These publications are of great scientific, historical, and cultural value; and they constitute a significant source base for caring research out. According to the Resolution No. 1709 adopted by the Cabinet of Ministers of Ukraine on 19 December 2001 28,081 units of rare books were entered in the State Register of Scientific Objects constituting a national heritage of Ukraine.